The number of tourists arriving in Uzbekistan increased by 30% 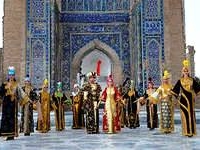 "Uzbektourism" reports that for the last 3 years the number of tourists coming to Uzbekistan increased by 30 percent. It became real because of adopted programs and policies since 2011.

They are tours with foreign tourism companies, cooperation with international TV channels like World Travel, Euronews, DS-Asahi and others.

Only for the last year documentaries about the major cities of Uzbekistan appeared on international TV channels (Khiva, Bukhara and Samarkand). Also a documentary about Bukhara city will appear on the Discovery Channel at the end of the current year. It will attract many tourists.