Tashkent of the future

The discussion of the perspective plan of Tashkent development was held in July, 10 at the meeting of the Public Council on the issues of environment and rational use of natural recourses under the State Committee of the Republic of Uzbekistan on Nature Protection was discussed long-term development plan of Tashkent.
Development Plan of the capital till 2030 provides for the conversion of Tashkent in the garden city, the opening of "light metro" in Sergeli and removal of the airport out of the city.
According to the main terms of the feasibility study it is planning to develop Tashkent as the capital and the leader of the social and economical progress of the country.
The main principals and key characteristic of the perspective development of Tashkent and its suburban zone till 2030 are determined in the feasibility study of the general plan: 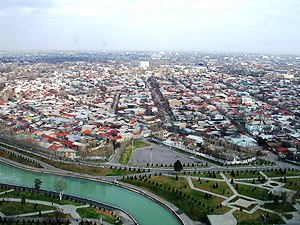 - Second life of waterways;
- Reduction of industrial zones in the city;
- Reconstruction of highways of the city;
- Prospects for the development of the passenger transport;
- Exclusion of Tashkent airport outside the city;
- Tashkent – “city-garden”;
- Energy rearrangement;
- Reconstruction of the irrigation network;
- Reconstruction of the city water supply network;
- Reconstruction of the sewerage of the city;
- Striving for perfection
Feasibility study of the general plan of Tashkent selected the variant of moderate territorial development of the city, where it is expected to increase the area up to 41.8 thousand hectares. The area of the district will remain at the level of 115.112 ha. The area of the city increased by 8630 hectares at the expense of the lands of Kibray area Srednechirchikskiy and Zangiata areas.
The growth of the area will occur primarily at the expense of the cutting territory to the north-east of the existing minor road, and district agricultural land in the south and southwest, which are located in the city area; as well as on the left bank of the river Chirchik - north of Yunusabad, south of the village Salar, Khanabad, territories adjoining Sergeli, the left bank of the river Chirchik till the projectable bypass road.
The border will become smoother, the territory of the city - more compact, especially along the southern and eastern borders. Annexation of lands along the canal Salar and river Chirchik to the city will require a large amount of measures for water protection zones. It is planning to completely equip the Tashkent ring road along the new border.