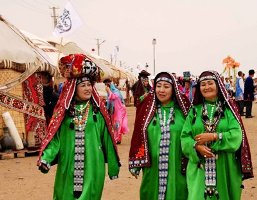 The six festival of traditional culture “Asrlar Sadosi” was finished on the 5 of May in 2013. About 120 thousand people visited the festival. Guests of the event had the opportunity to get acquainted with the cultural characteristics of all regions of Uzbekistan in dance, music and clothing; also they could see national games and competitions. Here one could see dance, folk groups, cock fights, ropewalkers, yurts, and also food items, where one could taste plov and shashlik.

Guests of the festival were interested by the fashion-show, where were shown the works of Uzbek designers. Of course there was the festival of national cuisine, there were presented the diversity of Uzbek cuisine: plov, shashlik, samsa, naryn and other tasty dishes. Also, near Bukhara, there was opening of renovated Mausoleum Bibi Orif built in the 16th century in honor of the mother of the famous Sufi Bahauddin Naqshbandi. One of the greatest Fund projects - Festival of Traditional Culture "Asrlar sadosi" (Echo of Centuries) presents the diversity of national traditions and customs, arts and crafts, national cuisine. "Asrlar Sadosi" (Echo of Centuries) is held annually in different regions of Uzbekistan with the participation of various experts, scientists and international guests.