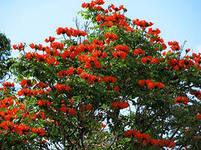 As “Uzbekistan today” reports, in 2010 it was decided to use the tulip trees for planting of greenery of our country. The tree is native of America, was named due to the flowers resembling tulips. It not only beautiful blossoms but also grows rapidly. The Institute Genofond of flora and fauna of the Academy of Sciences, as well as Mininistry of agriculture and water Resources were engaged by seedlings preparations. More than 20,000 seedlings were prepared from 2012 to 2013. Today, they were given for further growth in forestry of Tashkent, Samarkand, Termez, Navoi and Fergana. Young trees will be planted on the streets of the cities when it reaches a height of 1.5-2 meters.