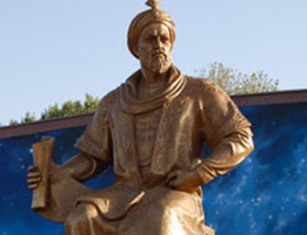 Mirzo Ulugbek is the statesman, an outstanding scientist, great astronomer and mathematician, grandson of the famous ruler and Commander Amir Timur, was born March 22, 1394 in Sultaniya city (Azerbaijan).
In 1409 Ulugbek became the ruler of Samarkand. During his reign, the city was one of the world centers of science of the Middle Ages. There used to be scientific school, united prominent astronomers and mathematicians. In the years 1417-1420 there was built a madrassah in Samarkand, which was the beginning of the architectural ensemble of the Registan. Since young ages Ulugbek fond of astronomy. So, he built a unique structure for its time, the famous observatory. In 1437 Ulugbek created Gurgansky Zidj (catalog of the sky), where were described 1018 stars. In 1444, after thirty years of astronomical observations the great astronomer created his scientific work - "Zij jadidi Guragani" or “New Guraganov astronomical tables”.
Nowadays, the study of Ulugbek’s spiritual and scientific heritage is carried out in the leading universities and research centers around the world. The great outstanding scientist made an invaluable contribution to the development of science and civilization of all mankind. In 1994 the 600th anniversary of the scientist with the participation of foreign experts and public figures was celebrated. All this shows that Mirzo Ulugbek was not only the son of the Muslim peoples, but but also the genius of creative thought.